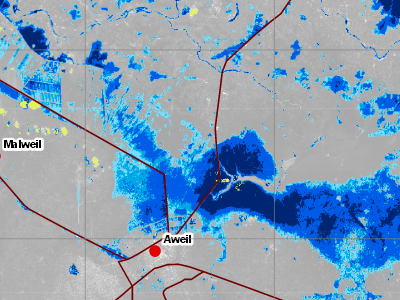 As every year since August until October, the area surrounding rivers Lol and Jur in South Sudan is visited by floods caused by torrential rainfalls that occurs during the rainy season. The swollen rivers flood the fields and villages depriving of home thousands of inhabitants of the state of Northern Bahr El-Ghazal.

The Crisis Information Centre that works at the Earth Observation Group of the Space Research Centre has attempted to develop an early warning system that will permit to inform of the coming flood, which will allow preventive evacuation of people from areas at risk of flooding.

An important element of the system are the analysis based on satellite images and other geospatial data. The results of the initial stage of the works are historical maps with flooded areas based on data from the MODIS sensor at Terra satellite and a hydrological model developed from digital terrain model created by the SRTM mission. Currently on a regular basis are created flooding area maps in order to follow the development of the crisis situation. At this time has been make up several maps which quality is verified on the fly by its end users from the helping organizations and local authorities in South Sudan.

It is scheduled to activate a network of water gages whose measures will help to evaluate the hydrological model.

The activities in South Sudan are made in collaboration with the Polish Centre for International Aidin the scope of the Polish Aid for Development program under the auspice of the Ministry of Foreign Affairs of the Republic of Poland.